If there is one thing that Bollywood actors and actresses have always been known for, its their dance. The gyrating moves, scintillating expressions and graceful dancing styles in movies have invariably helped in popularizing songs in the movies. So we asked our self, who has been the most famous dancer in the industry and only one name comes to my mind – Madhuri Dixit.

The ‘Dhak Dhak’ girl is still our favorite all time dancer in Bollywood films. Ever since she stole our hearts with her dance in Tezaab – her film when she danced to “Ek Do Teen” till today when she is giving the competitors  in Jhalak Dikhla Jaa a glimpse of her immense talent, we have been charmed by this lovely lady. It is not easy to choose Madhuri Dixit’s top ten dance performances, but here are our favorites among her films.

She stormed into the Indian screens with a bravura of a performance in this film. But the highlight of the film was her dance to this song. A mixture of Western and Indian dance moves, she made all of us sit up and take notice, and choreographer Saroj Khan told us that a new dancing star had arrived.

This is how she got the title of the Dhak Dhak girl – this song just designated her with this name. Anil Kapoor did not have a chance after she swayed in front of him to this song. Sensual and sexy – she made sure that none of us forget what a great dancer she is.

Who else but Madhuri could have made a fairly raunchy item song into a thing of beauty? Sanjay Dutt was mesmerized and we were fascinated by her grace and her raw charm. The words were full of innuendos and her moves matched them as they carried us to a world of intrigue and double meanings. Choli Ke Peeche is still a staple of drunk bachelor parties across the country, still playing in roadside village dhabas and high class urban gatherings.

A year later we saw another great song and of course the million dollar smile was back on the screen with Mera Piya Ghar Aaya. Madhuri embodied the joy of every girl when her lover walks into her house, and effortlessly she expressed the joy with her movements.

Many believe this song had Madhuri Dixit at her best – but then it is a matter of personal opinion. Dressed in an unforgettable purple saree, she mocked Salman Khan with simple dance movements and immense grace and elegance. If you watch this song – you will realise that it has no complicated dance manoeuvres, yet it looked good and classy. This song is a staple of Ladies Sangeet nights, a ritual in Indian weddings.

A film with a musical storyline to it, Madhuri danced on 3 scintillating tracks – which dance do we choose from this film? The Dance of Envy – performed with Karishma Kapoor, to no words, only music, or the dance that she performs while she thinks no one is watching, in Shahrukh Khan’s den? Or do we choose her dance in the rain to the song “Koi Ladki Hai”. Shiamak Davar did an excellent job choreographing this film and he had an apt pupil in Madhuri.

Dancing with one of India’s top choreographers – Prabhudeva, here was a dance which totally Western in it’s movements. She picked it up as a challenge and matched him step to step. It was a totally different dance form for her – yet once again she showed us that she is superb.

Madhuri is a trained Kathak dancer and in this song from the film Devdas she was very clearly the classical dancer. In a gorgeous lehnga, which must have weighed a ton, she not only managed to look beautiful but also graceful and superbly elegant. There are few dance numbers in any film which can match the refinement of this dance. 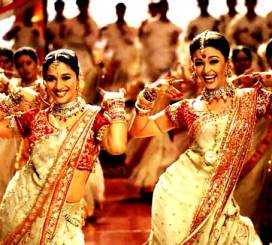 Two of Bollywood’s most beautiful women gave us a dancing duet which shall remain a part of our memories for decades to come. They swayed and swirled in tandem, and they gave us glimpses of grandeur and polish, and such beautiful dance movements, even today many believe that it is probably the most charming and graceful dance performed by two leading ladies in any film.

This was meant to be her comeback vehicle, after many years of an absence in films. The film did not do well at the box office, yet she once again proved that no one can match her with the dance, Aaja Nachle. A shimmering midnight blue outfit, eyes which could light up an entire film, and elegant dancing, suddenly we were mesmerized once again.

These days, Madhuri Dixit is judging a new breed of dancers at a reality show and occasionally she does get up and give them a whiff of what dancing really is. Still as beautiful as she was 20 years back, even after two children and the humdrum of a mother and housewife’s life, Madhuri Dixit can still light up the small screen with her perfect moves and her infectious smile.