It is official now: Ra.one (also known as Ra.1) is the most eagerly awaited movie of 2011. 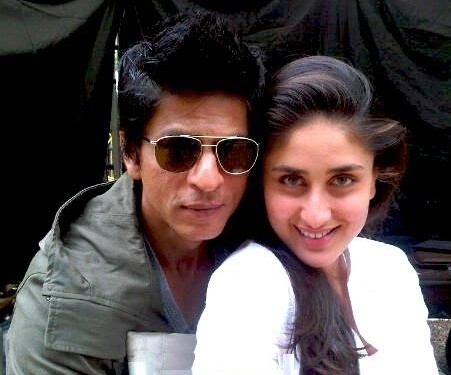 SRK and kareena while shooting for Ra.one

With Ra.one’s release date announced to be 3rd June, 2011, the eager fans of SRK will still have to wait for 5 long months. The buzz generated around this movie is tremendous and the die-hard fans of ShahRukh Khan can’t wait to see this one of a kind Superhero flick.

Ra.One’s plot is said to be similar to Toonpur ka Superhero, but one can be sure that the similarities would end there. While TSK’s animation and treatment seemed to be targeting the really young children, Ra.one is hip, happening and dazzling.

Ra.One’s Budget: Ra.One’s budget at 1 billion is said to be one of the biggest of all times in Bollywood.

Ra.One’s Plot: Ra.1 is said to mean Random Access – Version1. Though all aspects of the movie have been kept under tight wraps by director Anubhav Sinha, some of the information has been intentionally or unintentionally released. The story is that of a superhero who has the power to freeze electricity. The positive character, G.One is played by Shahrukh Khan. He will, of course fight off the negative character Ra.One – the evil techno monster is played by Arjun Rampal. Yes, that’s right – Shahrukh is NOT Ra.One. Kareena Kapoor, plays the role of SRK’s wife and the mother of their 8 year old son. In stark similarity to the Devgan’s

animation,  SRK goes inside a video game in order to impress his son who is disappointed in his father because he thinks that his father is not as heroic as the brave heroes he plays onscreen in his movies. Many parts of the movie have been shot in contemporary London, while some has been shot in Mumbai and Goa.

Ra.One’s Cast: A grand Hollywood ensemble cast and crew has been induced in order to ensure that the movie looks as good as any other Hollywood production. Ueli Steiger as the camera person, and David Benullo (of Hallowed Ground) as screenplay writer constitute this mix. Hans Zimmer has composed the background score and singer Akon has sung a song for the movie. Tom Wu, the Chinese-American actor would also be part of the film. It is said that Jackie Chan was contacted first for the role which Wu plays, but when he quoted a price which Red Chillies Entertainment could not meet, they settled for Tom Wu. Thankfully, the music of the songs is done by an Indian team – Vishal Shekhar. The special effects are being done by the VFX team of Red Chillies Entertainment and are being closely supervised and supported by Jeff Kleiser (Tron, Mortal Combat Annihilation, X-Men). The special effects of Ra.One are said to be groundbreaking stuff that the Indian movies have never boasted of before. Let’s hope Indian animation has finally found its feet.

G.One’s body suit: The costume that Shahrukh dons in the movie is said to be a special one. It was tailor-made in a hi-tech studio in USA. Reported to cost 1 crore, the body suit is unlike any other Bollywood movie has ever boasted of. Custom made for SRK in Los Angeles, a special technique was used in making it. SRK was lowered into a 12X3 chamber where warm reinforced latex was poured over him. Once the liquid had solidified around Shahrukh Khan’s body, the mould was cut from sides and removed. These two pieces were later on joined together with a concealed zipper. The body suit serves the purpose of providing protection from injuries while being flexible enough for stunts etc. If the posters of SRK in a blue body suit with lightning twirling around him is any indication, SRK is gonna look “zhakkas” in this new avatar. The ardent fans of SRK are confident of this.

Trivia: It is said that SRK introduced some more special effects after Rajnikant movie, Robot was said to have similar scenes. After Toonpur ka Superhero, SRK was said to be trying to spruce up the movie a bit more. The shooting for the movie was completed in September 2010 and the post-production (special effects and editing, etc) will take another 6-7 months.