Aamir Khan is often tagged as a  maverick, a perfectionist, a genius in marketing Bollywood movies and sometimes, ‘Mr Blockbuster Khan’. It is not easy enough to slot this guy. He has successfully handled the four spheres of film making which perhaps none of his contemporaries have managed to do – Acting, Direction, Production and Marketing. Surely Aamir has something unique in planning every movie till the end and to the top of Bollywood box-office blockbusters. First it was Ghajini which broke records and then 3 idiots. So what is it that keeps Aamir ticking, all the time?

1. Determination and Hard work: There is nothing more important than hard work, and Aamir Khan strongly believes in this age-old proverb. He, through his movies, keeps saying, “Aaj college ka aakhri din hai…” , from his first successful film ‘Qayamat Se Qayamat Tak’ to the very recent 3 Idiots. This has happened only because of his passion and determination to be the best.

2. ‘Being a Rebel’ and taking time to sign a deal: Though for Aamir Khan’s fans it is heart wrenching, but Mr Perfectionist had decided last year not to star any film in 2010 because for him quality is far far far more important than quantity. Aamir takes time to read every single script until the story satisfies him, completely.

3. The professional/personal balance: There is nothing single most devastating fact to mar one’s career than mixing one’s personal life and working life together. Aamir surely is not one of them. He is deliberately keeping his personal life from his working.

4. A Strong Nose For Scripts: All the  other secrets can be attributed to his determination and practice. But his nose for script is purely god gifted. Absolutely perfect. He knows what will tick and what will not. Even though Aamir prefers his work to speak for itself, but he has told his fans to wait for 2012 for his full fledged role.

5. Unique marketing ideas: Many the Bollywood stars carry out proper promotional campaigns for their movies, but Aamir transcends them all. He not only promotes his films but markets them. Be it by cutting the popular Ghajini buzz cut hair style or disguising himself to talk to his audiences, he has pioneered marketing and promotion in Bollywood like no one has.

Aamir has broken all possible ‘rules’ of cinema, in particular of Bollywood and Hindi films single-handedly. His films will gladly testify to this fact:

In 2001, Aamir produced the Oscar nominated film ‘Lagaan’. Now this was a film in which a bunch of villagers play cricket with the local British officials to save them from tax. A sports based movie, based in history? Seriously? Who in their right minds would have thought this film to be successful? Aamir Khan.

In 2006, he repeated this stunt with ‘Rang De Basanti’, a film based on Bhagat Singh. The interesting thing to note about the time of release of this film was that in the same year, 5 other Bhagat Singh movies had been made and flopped severely at the box office which clearly showed what the audience thought about the subject. But when Rakeysh Omprakash Mehra showed his script of RDB to Aamir, he said a yes. And sure enough, the film was as successful as anything. So successful that it sparked a sense of rebelling in the citizens of India and they led ‘RDB-style’ marches to protest [intlink id=”1435″ type=”post”]Jessica Lal’s murder[/intlink].

However, it was in 2007 that Aamir actually proved his mettle as a successful filmmaker. Commercially and critically. It was ‘Taare Zameen Par’ that made people sit up and notice  ‘ the meaning of meaningful cinema’. The film was about a young dyslexic child and how he overcomes his problems, teaching several important lessons to parents, teachers and kids on the way. Critically acclaimed all over the world and smashing records in India, TZP cemented Aamir’s status as the ultimate filmmaker of Bollywood.

What needs to be understood about this movie is:

1. The theme – A serious story about a child with learning disabilities as opposed to a love story/action flick which are staples of Indian cinema.

2. The stars – Only one – Aamir Khan that too for the latter half of the movie. It’s actually Darsheel who steals the show as Ishan Awasthi. Aamir only comes after half the movie is over, dressed as a clown.

3. No ‘commercial masala’ – The movie lacks big budgets, big stars, no song sequences – in fact nothing about TZP was conventional Bollywood. Only a man like Aamir could churn this into a commercial success. 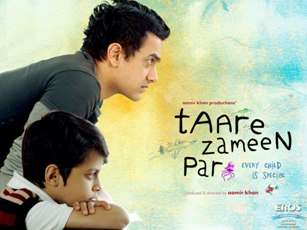 This year’s [intlink id=”1519″ type=”post”]Peepli [Live][/intlink] , was another Aamir Khan production that was much appreciated throughout the country. One of the best satires to come out of Bollywood in recent years, Peepli Live talked about farmer suicides, vote-bank politics, and the media frenzy that is currently rampant all over the country.

How he does it is pretty clear. The question is, why don’t other filmmakers learn from Aamir and continue to produce, direct and create trash that goes by without stirring one genuine emotion?

Read this post on Wikipedia to know more about Aamir Khan.