There are certain eras in the music field where the advent of a single person or a group can bring about an immense transformation in the nature of the music which tops the charts and also in the quality and style of music produced by others who follow them. The Beatles were one example of this phenomenon and today A R Rahman is another such example. Their impact on the music scene went way beyond the magnificence of their own compositions. They impacted the box office success of their films and also music of other composers and music directors.

A R Rahman came from a musically affluent family based in Chennai. His father was a composer of music for Malayalam films and after his death, the family sold musical instruments as a means of livelihood. He began playing in public for music troupes at the age of 11 and for many years he travelled as the keyboardist for well known musicians and bands. He even formed his own rock group, known as Nemesis Avenue. Later on, a scholarship to the Trinity College of Music helped him earn a degree in Western Classical Music. 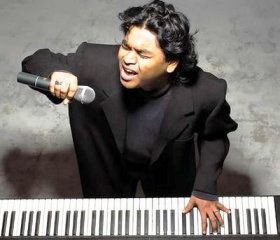 Rahman began his career as an independent musical composer in 1992 when he composed the music for jingles, documentaries and television channels. The hauntingly beautiful score of Mani Ratnam’s Roja is what catapulted him to fame and suddenly everyone was aware of this young tousle-haired musician with magic in his fingers and genius in his mind.

Rahman’s impact lies in the fact that he has successfully amalgamated many styles of music and has, year after year, given us scores which reverberate in our minds. Highly skilled in styles such as the Qawwali of Nusrat Fateh Ali Khan, Western Classical Music and Carnatic Music, he is among the few composers who can layer music of different genres and yet manage to produce a lyric that is totally him.

A R Rahman loves to experiment and fuse old music with new instruments. The synthesizer fascinated him from childhood and he was also adept at keyboard himself. In all his music, you can trace the sources ranging from old Carnatic music played with newer instruments, and western classical music overlaying Sufi genres. The fusion is evident and deftly done. Few other composers are able to achieve the harmony and the lyricism of Rahman’s scores and this is one of the main reasons why he has composed the music for every one of Mani Ratnam’s films and has also worked in collaboration with the best lyricists in the country.

The immense influence of A R Rahman on the Indian film music can be judged not only by the fact that he has won more awards than any other musician both at the national level and at the international level, but also by the fact that he has composed successfully for films of various genres. Sufi music was the base of Chaiyya Chaiyya, whereas Jai Ho of Slumdog Millionaire combined the essence of Hindi film dance music with pop rhythms and arrangements.

Let us have a quick glance at a few of his renowned creations. Roja, the first Hindi film for which he composed the music; Raavan, Mani Ratnam’s new film; Warriors of Heaven and Earth, a Mandarin language film; his stage production Bombay Dreams in collaboration with Andrew Lloyd Webber; and other Hindi films such as Taal, Lagaan and Dil Se. He has also composed background scores for documentaries and advertising jingles, the most famous one being the signature tune of Airtel. Versatility and an ability to adapt to the story and scenario have always been his hallmarks. You can listen to songs of Raavan to get a feel of what A.R Rahman can do.

A R Rahman is undoubtedly the most gifted composer on the Indian music scene presently. Nominated by Time magazine in 2009 as one of the 100 Most Influential People in the world, his influence on Indian music cannot be measured, just fathomed.