It’s been almost a month since Diwali, and dozens of movies have been released since then. Covering all sorts of genres and story lines, some old while some untested, but the success rate of these films has been way below par, so far. Two upcoming hindi movies might save us from getting crazy over boring hindi films. One is the Aamir Khan starrer called ‘3 Idiots’ while the other film is ‘Kurbaan’ which stars Saif Ali Khan and Kareena Kapoor, a real life couple.

Wake Up Sid was the only one of the lot which managed to ring the cash counters at the box office and not blow our minds off with dud scripts and intelligence offending storylines.  [intlink id=”890″ type=”post”]London Dreams[/intlink], though high on visual appeal and cinematography, had the same old themes of best friends turning into sour enemies.[intlink id=”894″ type=”post”] Blue[/intlink] was an absolute disaster in terms of the actor performances and direction. Main Aur Mrs. Khanna, All the Best, Acid Factory and Fruit & Nut all came and went by without fluttering a leaf of admiration on our filmy audiences. Ajab Prem Ki Ghazab Kahani, which released recently also had nothing new to offer – the story was totally predictable. In  short, the post diwali scenario of hindi movies has been dull and unsuccessful.

So what can save the hindi film industry from a totally wasteful year? As of now, heavy hopes are tied to two films – 3 Idiots and Kurbaan. We shall discuss 3 Idiots in this piece.

The film has been produced by Vidhu Vinod Chopra and directed by the critically acclaimed, Rajkumar Hirani (of ‘Munnabhai’ fame). Scheduled for release on 25th December, 3 Idiots has Aamir Khan, Sharman Joshi and R. Madhavan in the lead roles. Interestingly, Kareena Kapoor stars opposite Aamir as his love interest. We are definitely looking forward to their chemistry! 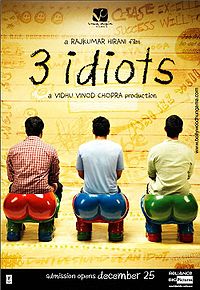 The movie has been primarily shot in major cities such as Delhi, Mumbai and Bengaluru but some scenes have also been shot in Ladakh and Shimla. The music of the film has been skillfully composed by Shantanu Moitra.

According to insiders, the movie is slackly based on Chetan Bhagat’s bestselling novel, Five Point Someone. A brief glance at the [intlink id=”905″ type=”post”]theatrical trailer of 3 Idiots[/intlink] is enough to reveal the basic plot of the movie which revolves around the prevailing ‘mera beta engineer’ and ‘mera beta doctor’ banega trend of the country. Now if that’s not food for thought, I wonder what is?

Socially speaking, this unnecessary evil has indeed been a bane of the system and created machine cogs out of bright young students. It’s time this habit changed and we looked inside us to chart out our career route instead of jumping on the band wagon and blindly following whatever is ‘hot’ on the market.