In India, families seem to rule the roost – whether it is in politics, business or Bollywood. Each leader brings some more members of his family into his line of work. When we look around among the well known figures of Bollywood this fact of life is very much in evidence. Among the Kapoors four generations have been in the forefront among the actors, among the Roshans, we have actors and music directors and of course when we speak of music the Mangeshkar family is all-pervading.
[ad#post] 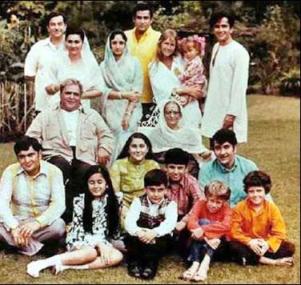 Many believe that they deserve the epithet of being family number One in Bollywood. It began with the gravel voiced Prithviraj Kapoor and his towering presence in the block and white films of long ago. His three sons Raj, Shammi and Shashi achieved various degrees of fame in Bollywood. The next generation brought forth Rishi Kapoor and for many years he reigned as the romance king of Mumbai. Today Kareena is counted as among the best and Ranbir Kapoor is being touted as the next reigning superstar. Talent and good looks are in abundance in this clan, and each generation brings forth someone who charms his or her way into the audience’s hearts.

Paa and his family:

The Bachchans are newer entrants into the Bollywood clans, but with Amitabh continuing to give stellar performances even now, and [intlink id=”1316″ type=”post”]Aishwarya  and Abhishek Bachchan [/intlink]being among the box office rulers, this family can also lay the claim to be among the topmost families in Bollywood. Let us see whether some decades down the line the next generation will carry the family tradition forward.
[ad#post-large]
The Khans and the Roshans:

It is not quite correct to bundle these two families into one, but they are interrelated due to the marriage of Sanjay Khan’s daughter to [intlink id=”768″ type=”post”]Hrithik Roshan[/intlink], so let us for a few moments look at them as one large family!. With Feroze Khan and Sanjay Khan at one end of the spectrum and with Roshan, the renowned music director and Rakesh Roshan and J Om Prakash on the other side, they cover a gamut of film industry sections. Farah Khan,the choreographer, Hrithik Roshan, the heartthrob of millions, and the late Feroze Khan, the quintessional Nawab of Bollywood are all a part of this talented and renowned family.

Dharmendra and his family:

Dharmendra and his wife Hema Mailini, were India’s sweethearts for many years. Their next generation has not achieved the levels which their parents did, but Sunny Deol still gives Stellar performances as India’s Bruce Willis, and [intlink id=”1420″ type=”post”]Abhay Deol[/intlink] has made his mark with excellent performances in the few films he has acted in. Esha Deol has not done too well, but it is believed that Ahana Deol is venturing into the field of direction.

No list of the top families of Bollywood is complete without the Mangeshkar family. Lata has been the voice of India for many decades and Asha Bhonsle is unsurpassed as the queen of lively happy songs. Her late husband R D Burman gave us music which is unforgettable, and his father S D Burman was one of the greatest music directors Bollywood ever had.

There are so many more that can be added to this list – but then such lists are always relative to our own personal biases and beliefs. Join us in a discussion through the comments section about who is number one and who else should have been included in this list!