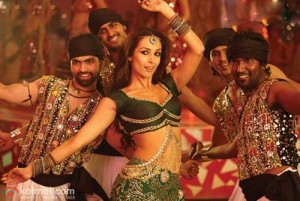 Bollywood, without its infamous item numbers, is considered incomplete by many. The current trend of sexy and raunchy item dance numbers in Bollywood movies, they are surely setting the Box Office ringing. From the 1990’s when songs such as Raveena Tandon’s Tip Tip Barsa Paani was a rage to 2010, when Katrina Kaif shook her fans with her super hot moves in Sheila Ki Jawaani, these scintillating dance numbers have contributed to the success of commercial Bollywood cinema in more than one way. In fact, item songs have become so popular, we actually saw a male actor, Aamir freaking Khan, do an item song in Delhi Belly!

She will again be seen in a super-duper-sexy dance song in the Hrithik Roshan and Sanjay Dutt starrer, Agneepath. And this time, she will be Chikni Chameli.

We have compiled a list of the top 10 raunchiest, sexiest and most drooling item numbers of Bollywood – from the 1990s till today.

I often wonder what is it that an ‘item’ number has that makes or breaks a movie in Bollywood and I have mostly reached only one conclusion – the skin. As a famous director puts it crassly:

Yep, that’s sadly the cold hard truth. Many actresses often enter Bollywood in a movie which is ‘hot’ or shows the actress in a very poor light. An example? The famous Katrina Kaif. She entered Bollywood in 2003 with a movie (true to its name) that boomed at the box office. Unfortunately, Katrina failed to learn from her mistakes and repeated the fiasco in 2010’s Tees Maar Khan. Read the Tees Maar Khan movie review and see the item number which defined the movie.

Anyway. That’s enough analysis for now. What do you think? Which is your favorite item number? Please vote/comment below to let us know!