After ‘Omkara’ and ‘Kaminey’, Vishal Bhardwaj’s next film, Saat Khoon Maaf which stars Priyanka Chopra as the killer wife of seven husbands.

Vishal Bhardwaj’s upcoming Hindi drama and black comedy takes its inspiration from the short story ‘Susanna’s Seven Husbands’, written by the the eminent writer Ruskin Bond. After Aitraaz (2004) and Yakeen (2005), Priyanka Chopra will be once again seen in a negative role. She plays the role of a young Anglo – Indian woman who is set out to kill her seven husbands. Why and what does she want to avenge? Well, let us wait and see. 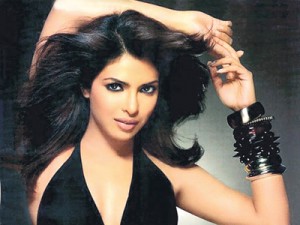 An interesting plot combined with Vishal Bhardwaj’s comic dark humor, Saat Khoon Maaf is much awaited in film fraternities around India. In addition, for the first time Ruskin Bond, the writer of Susanna’s Seven Husbands, will make his Bollywood debut against Priyanka Chopra. After What’s Your Rashee where Priyanka sported 12 different looks, Saat Khoon Maaf will see her aging from a 20-year-old girl to a 65-year-old woman  and because of this the media is abuzz to see how Priyanka makes the transition in the movie. It seems Priyanka’s make-up responsibility was in good hands too. Academy Award winning Hollywood special make-up artist, Greg Cannom, was hired by Bhardwaj to create Priyanka’s look in the film.

If you liked Priyanka Chopra is Aitraaz as a negative character, Saat Khoon Maaf should be the movie to wait for. Her powerful performance and choice of experimenting with genres never fails her. The plot sounds interesting. I thought of giving a Wikipedia link here about Ruskin Bond’s story but sadly, it seems nobody created a Wiki page on it. Well then, we have to wait to see the film unfold the story.