Did you have a teacher because of whom you dreaded school itself or did you have one who was the sole reason you trudged to school with that heavy bag each day? Stanley ka Dabba beautifully delineates the archetypal school experience; memories of which can etch deeply into our psyches that endure though adult life as well.

This movie review of Stanley ka Dabba may be two weeks late, but if you haven’t seen the movie yet, I urge you to do so. Amole Gupte (of Tare Zameen Par fame) has written the story and has produced and directed this film and has also played one of the main roles of the film; that of the Hindi teacher who is the bane of Stanley’s life. 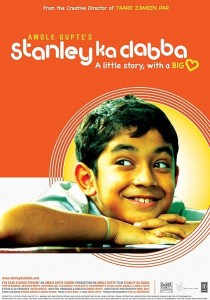 Stanley ka Dabba is a simple but heartwarming story, devoid of stars and shorn or technical marvels, but peopled with real characters and real individuals – both loveable and hateful.

Stanley is played by actor Partho, who arrives at school before anyone and also never seems to have anything to have for his tiffin. A talented and popular boy, he does however have firm friends who cheerfully and generously share their ‘dabbas’ with him. We don’t know until the end, the reason why that dabba of Stanley’s is always empty. The way that the other kids look out for their friend Stanley done really well and so very true to the way that children band together in pitiless world of cruel and all-powerful adults.

The adults in Stanley ka Dabba are the English teacher Miss Rosy (Divya Dutta), who clearly loves her students, whom she calls her babies, and for who teaching is clearly a vocation. Stanley and his bench partner are always at loggerheads because Stanley is left-handed and his partner right handed. While one teacher metes out punishment as a result, the other offers long winded lectures. Miss Rosy has a simple solution of having the boys exchange their seats to end all problems!

The science teacher Mrs Iyer (Divya Jagdale), has no affection and less patience for her students – she is the typical bad tempered, suspicious teacher with little imagination and whose reaction to what she views as a recalcitrant child is punishment and nastiness.

One of the protagonists in the film is the Hindi teacher Babubhai Verma (played with superb understatement by Amole Gupte) who has the strange affliction of gluttony. Like Stanley, he also brings no food of his own to the school yet unlike Stanley, he unashamedly takes other’s food even to the extent of relentlessly pursuing children in their lunch time and even eating surreptitiously from a fellow teachers’ dabba.

Each of us will likely recognize a teacher from our school days in one of these personages, which is what imparts great authenticity to the film, as do the ordinary looking school boys, the grimy school corridors and ubiquitous peon (Aditya Lakhia in a cameo).

The story is delightfully told and though it is told from a child’s point of view, it never comes across as juvenile or implausible. Though the adults are in charge and able to inflict harm, the children are also shown to have their minor victories such as when they manage to evade their salivating, voracious teacher as he pursues them for food.

On the negative side, Stanley ka Dabba does appear a tad unconvincing when the whys and wherefores are revealed in the end, (and some reviewers have called it slow in parts) but nevertheless it gladdens the heart and gives you hope that things will turn out well for Stanley, who retains your affection and sympathy throughout this film. The music is appropriate and competent if not hugely remarkable.

If you’re heading for the movies this weekend, may I suggest this honest, real and surprisingly enjoyable little film  – my 5 and 7 year old daughters enjoyed it too – the younger one turned to me in the end, gave me a tight hug and said, I loved this Stanley ka Dabba, ma!