It is a well known fact that the best loved Bollywood actor Shah Rukh Khan smokes; and from time to time smoking in films has come under the scanner for possible negative impact on the youth. Film makers and actors are frequently admonished for displaying scenes of smoking in films and SRK recently received an anti-smoking missive from an NGO called HRIDAY which urged the actor to give up smoking. 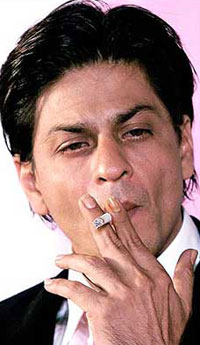 The NGO called Health Related Information Dissemination Amongst Youth not only asked Khan to stop smoking and send out a powerful health message to millions of Indians, particularly the youth; but also offered helpful tips to the actor on how to go about kicking the butt.

For his part, SRK responded by indicating that he had no intentions of giving up smoking and that he would do it so long as it was legal. “…it is my life, if you want me to change it, then make it illegal. I don’t do drugs, I don’t drink …I don’t do anything that is illegal,” he was quoted as having said.

What impact does smoking in films have?

Filmmakers and actors may brush aside the possible impact their on screen smoking may have on the youth, but studies have shown that smoking in movies does indeed have a significant impact on adolescent smoking. As there is evidence to show that violence and aggression on the screen can impact behavior, so can smoking by their favorite actors encourage young people to take up the habit. The researchers concluded that “young persons who view more smoking in movies are at increased risk for initiating cigarette smoking”.

Consider how it works – a movie hero is able to beat up a dozen baddies all on his own, rescue the ravishing heroine from evil clutches and generally look awesome while doing all this even while having ketchup liberally plastered over his handsome head. He then relaxes with a cigarette, looking oh-so-cool, with the result that the young boy viewing the film not only wants to beat up the baddies and get it on with the divine damsel, he also wants to dress the way the hero does, copy his mannerisms and so on. It is reasonable to assume that the hero looks really cool blowing smoke rings and that young boy in the theatre thinks that he will be able to look equally cool, cigarette in hand.

The evidence of the impact that TV and movies can have on the populace at large is clear – consider the fact that TV advertisements involving stunts and supermen can have the impact of making kids jump of buildings and perform other life threatening acts. This has had the result of having statutory warnings accompany TV ads “stunts performed by experts.., not to be imitated” and so on.

The Argument in favour of Smoking in films 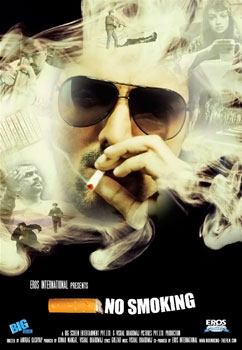 The counter argument to this is that filmmakers cannot predict or guard against all the varied impact their work may have on people, nor can they be held responsible for what every idiot decides to do post movie viewing.

The government had moved to try and ban smoking in films and its depiction on the screen, following certain portrayals such as by John Abraham in Anurag Kashyap’s No Smoking or Shah Rukh Khan in Don. Filmmaker Mahesh Bhatt took up cudgels on behalf of the film industry and asked for the ban to be struck down as it was volatile of basic fundamental rights of freedom of speech, expression and so on.

Smoking itself is not illegal so why should the portrayal of smoking in films be banned? Delhi High Court revoked the ban on smoking in films, agreeing with the plaintiffs’ view that it is the job of the censor board to weed out objectionable material in films and we don’t need someone else doing that job as well.

Certainly there is an argument in favour of allowing creative freedom to actors and filmmakers to tell a story as they deem fit – if there is an incident of murder to be depicted, is it not simulated for the viewing public? If the story is about a drug addict is the filmmaker to shy away from showing the person injecting or snorting or in whichever way ingesting the drug?

Cinema is after about telling a story and it is about make believe when all is said and done. And there is the larger issue of censorship involved here as well. Filmmakers can do their bit to have their protagonists behave as responsibly as possible; and reduce smoking in films; however viewer discretion is also required. Proper movie classification, rather than bans and censorship are more appropriate for a mature movie audience. And who knows, one of these days, we the movie viewing public may just grow up and decide what is OK and not OK for us to watch?