The latest scoop, according to the grapevine, is that Mr. Shahrukh Khan might play the greatest villain in the history of hindi films. But which character will Shahrukh play? Not surprisingly, he is being considered for the role of Mogambo – The evil, laughing and treacherous villain of Shekhar Kapur’s early nineties blockbuster movie, Mr. India. 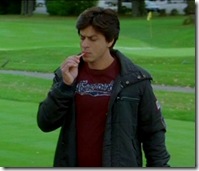 Shekhar Kapur is not too keen on directing the sequel but according to an interview, he wants to ensure that all the characters are played by competent actors in the industry.

As there is a severe dearth of talented actors who can play the role of convincing villains, Shekhar thinks that Shahrukh Khan might be able to do justice to the role owing his earlier anti-hero roles in popular cult movies such as ‘Darr’ and ‘Baazigar’.

Shahrukh will need to exercise all his acting skills to the maximum, perhaps take them to the next level. However, everyone concerned with the sequel are keeping a low profile. Shahrukh himself is busy promoting his upcoming home production, Billu Barber.