After Dev D, it’s been ages since I last wrote a music review for Bollykings. Rusted brain cells, a stressful lifestyle, inconsistent writing and generally repetitive music albums from Bollywood – these are the three top reason why you guys don’t get to read music reviews here.

Anyway, I’m hoping to be more consistent from now on so here’s a the Rockstar music review.

A.R Rahman has been criticized by critics in the industry of creating repetitive tracks in recent years. And as usual, he has proved his critics wrong. Usually, the music that is composed for a Bollywood movie helps in supporting a particular situation in the movie and this hold true for the music of Rockstar. In fact, being a film based on the life of musician, the music had to be all the more convincing and worthy of repeated listening.

Kudos to Mr. Rahman for being able to do exactly this. He has directed a fantastic music album which conveys the essence of Rockstar. Save for a couple of tracks, all the songs on Rockstar’s music album smell of fresh originality.

Another mention must be made of Mohit Chauhan. He has songs most of the songs in the movie and I have yet to see a better singer than him in Bollywood today! He is definitely the rising Rockstar of Bollywood.

Well sung Mohit, without you we wouldn’t have enjoyed the music of Rockstar half as much as we did.

According to Rahman, Rockstar is “a character driven film and as one can guess from the title, there will be lots of guitar”. “Sadda Haq”, perhaps the most popular song of the movie has been blaring across radio stations, bars and pubs across the country. It has rock in it. It has tons of character and style. It is deadly.

The guitar riffs on Sadda Haq are simple and the lyrics (though a little disconnected in the movie in terms of meaning) are pure poetry. Imtiaz Ali was trying to portray the repression of Tibetans through this song, almost telling China:

Powerful. Interestingly, Rahman roped in Orianthi Panagaris to play guitar on this track. A talented guitarist who played for Michael Jackson’s last concert, she has some slick guitar skills to knock out a track like Sadda Haq.

Personally, this is Jo Bhi Main is my favorite track on the record. A soulful, mindful and decently original song, I like the ‘Ye Ye Ye’ and the lyrics of Jo Bhi Main:

A chirpy song with an intrinsic punjabi feel in it, Katiya Karun sounds a little like the songs on Love Aaj Kal. I still don’t know the meaning of Katiya Karun though. Searched for it and apparently it means to “spin cotton”. So “Main saari raat katiya karoon'” essentially means that she’s willing to do anything for him the whole night. 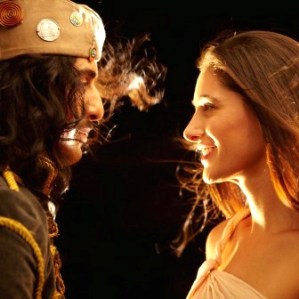 A very touching song, Nadaan Parinday comes right at the climax when Jordan is calling out for Heer to come back to life from her coma. I feel that the lyricist could have done a better job by putting in more relevant lyrics. But then again, I guess the song indicates that Heer is a wild spirited, innocent free bird (parinday) which is actually what Nargis Fakhri is like in real life. Anyway, the music of this song is nice as the rest of the album. No complaints there!

I just couldn’t help but deeply appreciate A.R Rahman for composing this captivating sufi song. Reminded me a little of Khwaaja Mere Khwaaja from Jodhaa Akhbar. The song was shot at Hazrat Nizamuddin Dargah in New Delhi. Kun Faaya Kun has been recorded with a beautiful arrangement of instruments including harmonium, tabla and guitar.

All in all, the soundtrack of Rockstar enthralled me. Even though I didn’t know the meaning of Kun Faaya Kun and Katiya Karun (I have to have to know what the song means), the music totally blew me away.