Come April 8th and we shall see Akshay Kumar in yet another romantic comedy- Thank You. In the movie, Bobby, Irrfan and Suneil play the roles of Raj, Vikram and Yogi respectively who are business partners and friends who cheat on their wives. The wives are however unaware of their unfaithful activities. That is till Raj’s wife Sanjana (played by Sonam) gets suspicious and decides to hire a detective, Kishan (played by Akshay) to spy on her husband. While Kishan usually gets such men to mend their ways and abandon the path of infidelity, his interest in Sanjana hinders that job in this case. The story uncovers a rib tickling sequence of events as Kishan tries to catch the three men in the act while the trio try to save their skins.

Through the story, Kishan tells the women in the audience what men really have on their minds when they say some things to their wives/girlfriends. Akshay recently said in an interview that he thinks women can actually take lessons from the film as he reveals the dark secrets of men and gives the right interpretation of the games men play.

Starring in her fifth Bollywood release so far and her first of this year, Sonam will be working alongside Akshay for the first time. She is still waiting for her first real hit and will be wishing that this movie does for her what Delhi 6 and Aisha failed to do. After receiving average reviews for his last release Patiala House, Akshay will be hoping this film gets a better response. Bobby Deol however will be riding high on the success of Yamala Pagala Deewana. The usually reserved actor went all out to promote YPD and it seemed to have paid off. Seeing that, the makers of Thank You decided to involve Bobby more with the promotions of this film too. 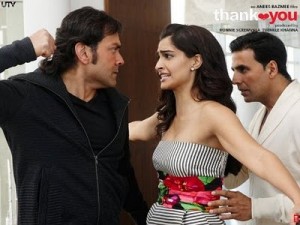 Mallika Sherawat performs an item number- Razia (yes, another one this year!), in the movie. The film also features a remix version of the song ‘Pyaar do pyaar lo’ from the 1986 Anil Kapoor and Feroz Khan starrer Jaanbaaz. The shooting for the film was carried out extensively in the Canadian cities of Toronto, Ontario and Vancouver.

With a good star cast and a talented director, the movie gives a lot to look forward to. Hopefully the talent pool involved in this film will not disappoint us this time. The trailer of the film can be viewed on this website.