If there is one thing that Bollywood needs at the moment is a decent watchable movie. One that will be talked about for the next few weeks. With almost half the year over, we have yet to see a ‘true’ blockbuster movie. Mani Ratnam’s Raavan, slated for release on 18th June, has the media speculating already whether the chemistry between Aishwarya Rai and hubby Abhishek Bachchan will work on screen again after ‘Guru’.
[ad#post-large]
Mani Ratnam has apparently shot a loose adaptation of Ramayana, the great Indian epic. It is said that Raavan will have a new twist on the Ramayana. From what we have seen so far, this sure seems like a fireburner!

Raavan is not a story but a world in which Dev (Vikram), a policeman, falls in love with Ragini (Aishwarya Rai Bachchan), a classical dancer. Both unconventional characters, they get married and settle in Lal Maati, a small town in northern India. 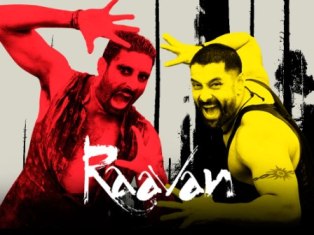 Lal Maati is a town where the word of law is not the police but Beera (Abhishek Bachchan), a tribal who has, over the years shifted the power from the ruling to the have-nots of the area. Dev knows that the key to bringing order to any place is to vanquish the big fish, in this case – Beera. In one stroke Dev manages to rip open Beera’s world, and set in motion a chain of events which will claim lives, change fortunes. Beera, injured but enraged hits back starting a battle that draws Dev, Beera and Ragini into the jungle.
The dense, scary jungle is the setting of the journey where the lead characters must find the truth, fight between good and the evil, between Dev and Beera, between Ram and Raavan. When the lines dividing the good and the evil starts to blur, whose side will you take? When hate turns to love and good starts looking as evil which side will you battle for. Love is a battle that nobody wins but everyone must fight for. Even this Raavan.

The music of Raavan has been released and will be up for download soon!