Three times national award winner, veteran stage and commercial actor, Pankaj Kapoor is now all set to make his first ever directorial attempt. This film titled ‘Mausam’ stars Shahid Kapur, his son. It went on floors in the end of January this year and is expected to be completed by July. Along with home country India, the film is planned to be shot at several international locations like Australia, UK, Italy and Spain.

‘Mausam’ is a romantic film where the actor is pursuing his love interest. To cast opposite Shahid, Pankaj was determined to select an actress who was beautiful and could act well too. Some internal sources report that Pankaj wanted to introduce a new face in the flick, but Shahid 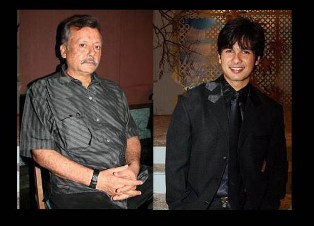 refused to work with a newcomer. Apparently he was enthusiastic to approach Katrina Kaif.

However, Pankaj auditioned many budding new faces from with in the film fraternity like Narmada (Govinda’s daughter), Sonakshi (Shatrughan Sinha’s daughter) and actress Shazahn Padamsee. Finally he has zeroed down to Sonam Kapoor and the two have started shooting as well.

Pankaj proudly talks about his son and says, “I am sure Shahid would surprise the audiences with this flick.”

Coming to Pankaj Kapoor, the actor, he would next come on the silver screen in Bhavana Talwar’s ‘Awasthi.’ The two had earlier worked together in the film ‘Dharm.’