It seems few people are ready to innovate when it comes to attracting eyeballs in Bollywood. First we had Malaika Arora Khan, an item number veteran, gyrating to desi tunes and lyrics in Munni Badnaam. The song was a super hit, and movie, Dabangg, was a super duper blockbuster. Then came Katrina Kaif with her sizzling belly dancing moves in Farah Khan’s Tees Maar Khan. Katrina’s Shiela Ki Jawaani worked like a charm and within a few weeks virtually every Indian, young or old, girl or boy, aunty or uncle, had Shiela on their minds. The result? Katrina Kaif got a much larger fan following with more and more people becoming hungry to just see her hotness. However, Tees Maar Khan gave the few people who went and watched it, a really bad headache. 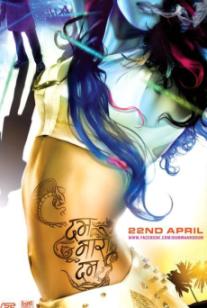 And now, we have yet another hot bollywood actress who has been caught by the item number bug – Deepika Padukone. Even though she does not have Malaika’s super hot thumkas or Katrina’s sexy charm, Deepika Padukone does look hot in that leafy micro. The song is from Rohan Sippy’s upcoming Bollywood flick Dum Maro Dum which also stars Abhishek Bachchan. Check out the super sexy Deepika Padukone in this grungy item number!