Before we say anything else about this film, there are a few things that you should know about Luv ka the End – the latest Hindi movie to come out of Bollywood.

1. It has a director whose name is Bumpy (yes that is apparently his whole name) and is known as the director of the reality show MTV Roadies.

2. The director states that there is a layer of stupidity running through the entire film; and that it is targeted towards the teeny bopper variety of audience because, you know, stupidity happens at that time. 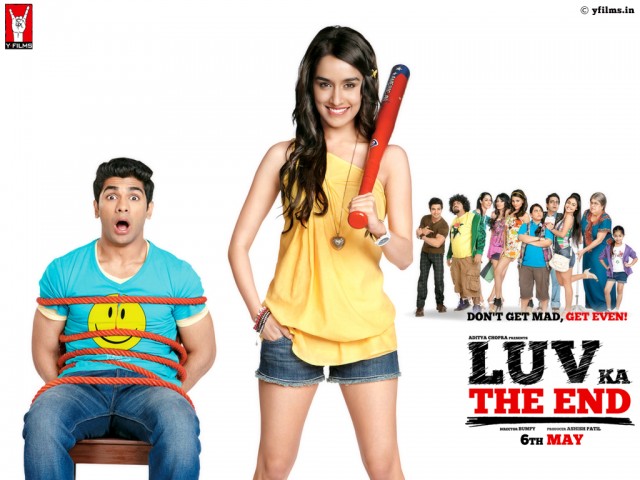 3. The makers have clarified that this film is not based on the Hollywood film John Tucker Must Die so obviously the resemblance to inspiration from that film must be very striking indeed (and I have to wonder if the Hollywood connection is the reason that the girl is holding what appears to be a baseball bat in her hand).

4. This film was earlier titled Girls just wanna have fun – evidently wreaking revenge and heaping humiliation on the object of one’s scorn is all about fun

It is touted to be the first Anti-Rom-com that begins at the end – Luv ka the End is about what happens after the love dies and after an 18 year old girl has had her heart well and truly broken by the college Lothario.

This is the second movie of Shraddha Kapoor, Shakti Kapoor’s daughter, though it may as well have been her first, considering the fact that her first movie Teen Patti passed us by completely. This is the story of the naïve teenager Rhea Dialdas played by Kapoor who falls in love with Luv Nanda, (so he is the ‘Luv’ as well as the ‘Love’) part time student and full time ass@#$%, the rich kid played by debutant Taaha Shah.

On her 18th birthday the two decide to take their relationship to the ‘Next Level’ – there is the plan to party all night and more but the 18 year old is seriously disillusioned when she gets to see the real Luv Nanda and then proceeds to plot revenge.

The fateful words “I swear on my psycho dadi, I’m going to have his balls!” are uttered and the jilted girl and her cohorts proceed to teach the two timing so and so some valuable life lessons and all manner of shenanigans to ensure that the ‘Luv’ meets his fitting The End’.

The movie also stars Shenaz Treasurywala, who plays a sexy professor, Errol Marks as Gollu and Meherzan Mazda as Timmy. Apart from them, there are various other side characters on the cast who ensure some light moments with their fun and games. This movie even features the regular item song, the only difference being that the “item” is actually a man in drag which, we are coyly informed by the lead actor is for ‘those boys’. The ‘item’ song is entitled Taaza Mutton and is presented for your edification below the trailer here (I don’t recommend it unless you have a fairly strong stomach).

So if horror stories are not your thing (Haunted is the 3D Hindi release this weekend), and other Bollywood dramas such as Kashmakash or the Nana Patekar and Anurag Kashyap starrer action flick Shagird fail to stir your interest, you should head for the quintessential teenager flick, Luv ka the end.