Summer is a good time for Bollywood when the kids have holidays and people seek out fun things to do. What better than the cool environs of a movie theater to have a good time with friends and family?

With a bunch of the latest Hindi Movies coming hot from the oven, the summer seems brighter than ever. Though we cannot promise if any of these films will be a total entertainer, I’m quite sure you will come across some hearty no brainers!

You can’t have missed the TV promo of Always Kabhi Kabhi; obviously a teen romcom. The film is about the lives and loves of the bright young students at a school called St Marks. The film stars   Ali Fazal (remember the boy Jay Lobo who kills himself in 3 Idiots?) as Sameer Khanna, who is the archetypal cool dude, Giselli Monteiro (remember the Punjabi kudi in Love Aaj Kal?) as Aishwarya Dhawan the pretty girl who wants to be more than a pretty face,  Zoa Morani as Nandini the wild one,  Satyajeet Dubey as Tariq Naqvi, the school topper Satish Shah and Lilette Dubey among others.

Bheja fry 2 – For any one who saw and loved that mad caper the original Bheja Fry, this one of the Friday Hindi movie releases is bound to be of great interest. This edition also includes the old characters of the importunate Bharat Bhushan played by Vinay Pathak and Kay Kay Menon as Ajit Talwar. In addition there aer Minissha Lamba as Ranjini, Amole Gupte as Raghu Burman, Suresh Menon as  M T Shekharan and Rahul Vohra as Kapoor. This time around the tax inspector Bharat Bhushan enters a game show hoping to win and make his own music album. What he does win is a holiday on a cruise ship where he meets Kay Kay’s character who is on the run from the income tax authorities. After a bunch of mistaken identity episodes, the two men land up on a desert island. 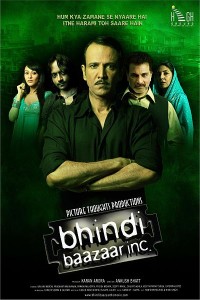 Bhindi Bazaar Inc., another of this weekend’s Hindi movie releases, is a look at the Mumbai’s dark underbelly (yes yet again). The main characters are Shroff (Kay Kay Menon) and Darzi (Gautam Sharma) who each try to outdo each other in a vicious game where people are mere pawns to be disposed of at will. There is also a small time pickpocket Fateh (Prashant Narayanan) who aspires to the position of the local don or Mamu. The movie also features Deepti Naval and Pawan Malhotra as Mamu and his wife.  The film set and shot in the crowded by lanes of Mumbai’s infamous Bhindi Bazaar also features an item number by Caterina Lopez.

Bin Bulaye Baarati, another of this weekend’s Hindi movie releases, stars Aftab Shivdasani, Nisha Kothari, Om Puri, Mallika Sherawat, Rajpal Yadav, Gulshan Grover and Mukesh Tiwari. The story is about baddies who meet at a casino to strike a deal involving diamonds. The fortune of the baddies is highjacked by AD and Shreya (Shivdasani and Kothari) and on the run the run into other mad cap characters who are also on the run and all manner of mayhem ensues.

Cycle Kick – is a story about modest means and lofty dreams. The film stars K.P. Nishan Nanaiah, Sunny Hinduja, Girija Oak, Ishita Sharma, Dwij Yadav, Tom Alter, Sameer Kochhar and is about two village boys, Ramu (Nishan) and his younger brother Deva (Dwij Yadav). One day they find a beaten up cycle which changes their lives. The fix the bike but it gets stolen. The cycle ownership will be decided by a football match, who will win?

So these are the main Hindi Movie Releases for this Friday, 17 June for you to choose from. There appears to be a lot of variety to choose from; one wonders what fate awaits these films at the box office.