A Comedian Wrapped in a Singer or was it the Other Way Around?

There are very few members of the Bollywood film fraternity who can be truly called multifaceted. Most of them excel in one field and just about tinker around in the other fields of their profession. Amitabh is a great actor,  a mediocre singer and fairly good TV anchor. S D Burman was a great musician and also a great singer. But it is only Kishore Kumar who can really and truly be certified as a man of all season – highly eccentric of course, but a genius, nevertheless.

There are few facts about Kishore Kumar which are generally known. He was the fourth child of a lawyer of Khandwa and was twenty years younger to his well known brother Ashok Kumar. Mischievous and impish he spent his childhood playing through most of his schooldays and also earned some money from his parents by singing for them. He would often imitate K L Saigal, who he considered to be his guru.

He entered the Bollywood firmament as a bit actor, propelled by his elder brother Ashok Kumar. His first acting role was for the film Shikari, and his first song was for the film Ziddi in 1948. S D Burman heard him singing in the bathroom, doing a fairly good imitation of K L Saigal. It was Burman Dada’s advice to find a style of his own, and his trust in him for his film Aradhana which propelled Kishore Da to glory and everlasting fame.

Chalti Ka Naam Gaadi is probably India’s finest comedy film. Kishore Kumar danced and adlibbed through most of the film, and with his future wife Madhubala, he lit up the screen with his antics. In Padosan  he was Sunil Dutt’s friend and guide and gave the fabulous Mehmood a run for his money. He modelled his role on a classical singer uncle of his, Dhanajoy Banerjee, and being an excellent mimic gave us a performance that was unforgettable. Few people realize that he acted in 86 films, the most notable among them being Mr. X in Bombay, Aasha, and Door Gagan Ki Chhaon Mein. 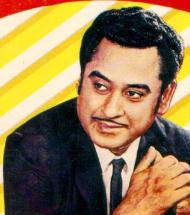 Even though most of the films he directed did not do very well in the box office, yet they will be remembered for the depth of emotions within them, and for his sensitive portrayal of the lives of ordinary people. Door Gagan Ki Chaon was his most successful film, and he wrote the story, directed and produced this film, along with being the music director. He produced 14 films, but unfortunately six of them never reached the silver screen. He wrote the lyrics for such great songs as “Koi Hum Dum Na Raha”, “Aa Chal Ke Tujhe “ and “Beqarar Dil to Gaye Jaa“

He was probably one of the most eccentric actors or singers among the renowned Bollywood fraternity. He would always be late and would often just not turn up for his recordings. He would not commence recording until his secretary confirmed that the payment had been received.  During the days of the Emergency he refused to sing for Sanjay Gandhi at a Congress rally and All India Radio was forbidden from playing his songs for a short while. Despite his penchant for demanding his money in advance, there are many music directors for whom he sang without taking any payment. Outside his home he had put up a sign “Beware of Kishore”. Despite all these eccentricities for over three decades he was India’s top male singer. 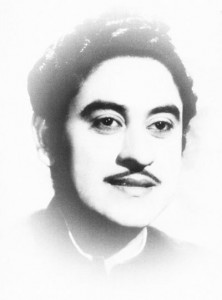 To talk about Kishore as a singer we shall need much more time and space. Needless to say, here was a man who had had no formal training as a musician yet sang for almost all our top actors. He could bring pathos into a son with such ease that often you could visualise the agony and turmoil in the actors mind, with songs such as Amar Prem’s , “Chingari Koi Badke“. He could make us laugh and smile when he sang  “Khaike Paan Banaraswala” from Don, or when he told us “Pug Ghungroo Bandh Merar Nachi Re” in Namak Halal. While recording the song from Don, he kept chewing on paan and spitting it on a plastic sheet in the studio in order to get the right mood and feel. By the time he died in 1987, his voice was the voice for many actors ranging from Dev Anand to Rajesh Khanna. No one could yodel the way he could and no one could make a funny song sound like a comedy routine like him

Kishore Da – there will never be another one to match you. We miss you.