Jolly LLB was one of the best Hindi films of 2013 helmed by Subash Kapoor. It was extremely rare to see Bollywood taking a step in an Indian courtroom, mixed with realistic storytelling instead of the regular high-decibel dialogue-baazi. The movie drew humor and melodrama from true situations, taking the support of some of the industry’s finest actors, with the protagonist being the inimitable Arshad Warsi. Before Jolly LLB, the only courtroom drama that took a space in our minds was Govinda’s Kyunki Mei Jhooth Nai Bolta.

It goes without saying then that the director has taken quite a dive with Jolly LLB 2, and has increased the game by taking a superstar as his protagonist. We are sure everyone is curious to know the answers to just two questions: Is Jolly LLB 2 as good as Jolly LLB? Is Akshay Kumar better or at par with the extremely talented Arshad Warsi? 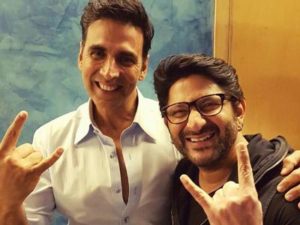 Jolly LLB 2 released with a different level of expectations due to the presence of the superstar Akshay Kumar, who is the lead of the film. Akshay Kumar is indeed a jolly good fellow. Akshay Kumar enacts the role of a lawyer, Jagdishwar Mishra aka Jolly who is struggling to make his mark in the industry and does wrong to a needy woman Hina Siddiqui (Sayani Gupta). He feels guilty for her death and plans to fight for the case of Hina’s husband who was killed in a fake police encounter. The person who is accused of the fake encounter is a famous cop yet Jolly takes up the challenge of getting justice for the innocent. The opponent of Jolly for this case is a well-versed, experienced and powerful lawyer Mr. Mathur (Annu Kapoor). By all means, it seems like a war that is already lost for Jagdish who has neither the means nor the deceptiveness to win a case like this. But somehow in the end, he plays a trump card.

Jolly LLB 2 is a movie with interesting bizarre characters played by some extremely talented actors. .The movie has the presence of veterans like Ram Gopal Bajaj to Vinod Nagpal, Manav Kaul to Sanjay Mishra, Brijendra Kala to Sudhanva Deshpande, all in one screen.  They might make a blink and miss impact but they surely can’t be forgotten. Their roles aren’t very long so it could make you ask for more of them. And then, the most important of them all are Saurabh Shukla and Annu Kapoor who put an extra zeal to the clever lines, wordplay, and emotions.

Subash Kapoor looks like he has been taking quite some inspiration from the pioneer Rajkumar Hirani. Jolly LLB 2 has a lot of similarities to Munnabhai MBBS.  Both the movies showcased the good-hearted lead actor seeking a revenge; his discredit in front of his father; his fight against the entire system; his rise as the people’s hero. There is utmost genuineness in Kapoor’s film, which is the only reason one can get through the worst scenes.

The director has arranged an outstanding cast, got out effective performances and delivered a movie that wants to make a difference. Even though the screenplay or the story aren’t really extraordinary, the director has done a commendable job with casting as the actors are the ones who have made this film stand apart. The story is realistic and sums up the true facts of life: surnames define the person’s belonging, cheating is legit, a struggling lawyer, corruption in the system, and so on. It also showcases how stereotypes of professions can be broken – how a munshi’s son fulfills his ambition of becoming a lawyer and dreams of owning his own chamber someday.

Akshay Kumar gives a good performance and has gone to great extents to do enough justice to his character – right from his looks to his speech. Huma Qureshi is very appealing despite the fact that her character does not have much scope. Annu Kapoor is a powerhouse on screen. He plays the wicked character with such unimaginable dignity. Saurabh Shukla is the film’s high spot and he performs as smooth as an ace. The climax of the movie is fun to watch mainly because of the jugalbandi between him and Akshay. The movie also highlights the tension of Kashmir, very subtly and beautifully through its screenplay!

The fun is in throwaway details. The best one is where the judge is editing his daughter’s wedding card in the courtroom. That is one priceless moment. The judge’s entry is absolutely hilarious. Then, in another small scene, we see Jolly making rotis for his family and it made our hearts melt!

The movie also makes sure to give credits to the earlier Jolly in one of its scene where the judge gets rather skeptical on hearing the name ‘Jolly’.  Indeed, both the Jollys played their parts extraordinarily well!

For us, our most favorite part was towards the end. It was when the judge does a monologue on the integrity of the Indian legal system. The camera is beautifully focussed on him while he speaks and slowly, pans back to show the stacks of files where justice has yet again been delayed and maybe denied.

The first half of the movie somehow looks unconvincing. It needed to be more engrossing and tighter. The worst of it was a tuneless Holi number, ‘Go pagal’ — that completely disrupts the mood of the narrative.

The other biggest disappointment was that the brands came into the picture maybe after the production of the scene rather than before. It looked like a forceful product placement and didn’t really come as smooth as it should. In one scene, Akshay Kumar feels like diving into the Ganges to get rid of all the bad he has ever done, which was a rather senseless scene. It didn’t take us long to understand that it was just a promotion of the Dollar Big Boss banian, that Akshay Kumar endorses.

In the first movie, the director was a free spirit and used more of his creativity and out of the box thinking.  Jolly LLB 2, a ‘ much bigger’ production, follows more rules that are pointed towards the demands of a mainstream ‘commercial’ audience.

Arshad Warsi had lent some natural comic flair and spontaneity to the first legal drama but with Akshay Kumar coming in, Jolly LLB 2 seems to have lost it. What we didn’t like further is that Huma Qureshi’s character is extremely under-developed. The screenplay does not tap the full potential of either the actress or the role she plays.

Jolly LLB might have its own flaws but it makes up with its honesty and of course, the superb performances from the cast. It surely is a one-time watch!