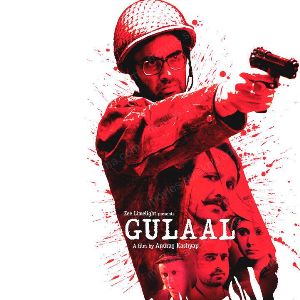 The film Gulaal is about an innocent student Dileep comes to Jaipur to study along with his very faithful servant Bhanwar. Against the backdrop of a local political conspiracy, the film begins with a Rajput conglomerate gaining strength as an erstwhile royal Dukey Bana and a few other ex-royals convince a reluctant Ransa to contest for college elections on behalf of the Rajputana party. The main fight is then between Ransa and Kiran for the general secretary’s post. The rivalry between the two groups intensifies and eventually leads to Ransa being killed by Kiran’s brother. Dileep the student who comes to Jaipur to study is then asked to contest the election by the Rajputana party in Ransa’s place and made to win.