After his unconventional last movie (Dhobi Ghat), Prateik Babbar is all set to burn the screen with supermodel Amy Jackson in their upcoming Hindi movie, Ek Deewana Tha.

It seems almost everything about Ek Deewana Tha, apart from the lead actors, has been copied from Gautham Menon’s Tamil film, Vinnaithaandi Varuvaayaa (VTV). Interestingly, VTV was also remade into a Telugu film titled Ye Maaya Chesave in 2010.

The soundtrack and film score of Ek Deewana Tha has been composed by A. R. Rahman, as he had done in the Tamil and Telugu versions. Even the original cinematographers and editors, M. S. Prabhu and Anthony Gonsalves, have been hired for Ek Deewana Tha. Last of all, singer Chinmayi  who dubbed for actresses Trisha Krishnan and Samantha Ruth Prabhu respectively in the original Tamil version and its Telugu remake, is doing that for Amy Jackson in Ek Deewana Tha.

The story of Ek Deewana Tha is nothing new – the same opposites attract, fall in love, get broken, and get back again. Well, part of it is true and the rest can easily be deduced from the trailer.

Sachin (Prateik Babbar) is a regular 22 year old engineering graduate who comes from a middle class family in Mumbai. He is a Bollywood fan and wants to make it big in the movies.  Surviving on his father’s pocket money, Sachin is desperately trying to land a role in a mainstream movie. And that’s when he meets Jessie (Amy Jackson). He is blown away for it’s love at first sight for him. However, every Bollywood love story has a conflict to it to make it more interesting. in EDT, Jessie comes orthodox Malayali Christian family where watching movies, partying or falling in love are completely taboo.

While Sachin battles with the idea of someone like Jessie and her family living in 21st century, modern Mumbai-he finds himself increasingly drawn to her. Jessie, for her part, tries to forge a friendship between them-believing that cloaking their feelings under the umbrella of friendship would save them heartache, tears and a full blown family drama.

The intentions of the filmmakers are quite clear – all they want to do is make money by rehashing a Tamil story that worked years back, into Hindi and feeding it to Bollywood fans. I wonder when will creativity and not money, will rule. At least in the film and arts industry. 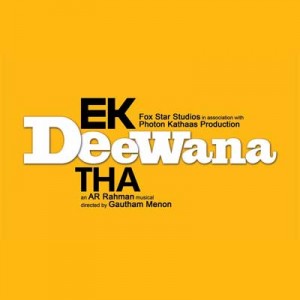 Prateik Babbar is the son of Bollywood legend Smita Patil while Amy is a British model who has appeared on the covers of a lot of fashion magazines (FHM, Maxim, Cosmo, Vogue). According to the grapevine, Prateik Babbar and Amy Jackson are romancing each other off screen as well. Of course, this could also be a publicity stunt but apparently, they were really comfortable doing intimate scenes on screen.

The Trailers of Ek Deewana Tha

Watch the trailer of Ek Deewana Tha below. The movie seems to be pretty decent – let’s hope Amy Jackson shows some promise and talent because Bollywood could seriously do with some nice foreign maal among the usual crop of desi actors.