Dhamaal is back in its new avatar – Double Dhamaal, what else? The joker gang is back and so is Sanju baba, so for sure Double Dhamaal will have its share of tomfoolery and misunderstandings and it will have what was missing in the first movie – the babe quotient and it’s there in double measure too. 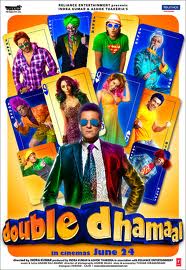 Double Dhamaal boasts of having two very entertaining women (in their own rights) but whether they’ll be able to create comic history, remains to be seen. Kangana Ranaut’s earlier attempt at comedy Thank You went belly up but her comedic efforts in Tanu Weds Manu were appreciated. Mallika Sherawat also has a short portfolio as far as comedy is concerned, but she looks much at easy in her role in Double Dhamaal if the trailers are anything to go by.

Double Dhamaal has its old gang of boys – Sanjay Dutt, Arshad Warsi, Riteish Deshmukh, Javed Jaffrey and Ashish Chowdhry and there are two ladies to top it off, so we are looking at a laugh riot that’s only gone more glamorous. Javed Jaffrey was at the top of his game in the prequel and it looks like he may as well steal the show in this one. Even the songs look fun, check out Oye Oye for starters and you’ll feel the fun quotient beginning to grow on you. For all such slapstick comedies, one of the male actors is usually stuck being the main cross dresser and this time it is Ashish Chowdhry who is seen in a female get up several times in the trailer. Apparently, it will be Riteish Deshmukh who’ll get to romance Kangana and Sanjay will be romancing Mallika Sherawat. So, between disguises, falling, kicking and getting kicked, this boys’ gang may as well take away the proverbial cake with their nonsensical antics.

Check out the official trailer of Double Dhamaal[HD quality]