This is one of those surprising films that lives up to the hype and high expectations that people had from it – Delhi Belly is funny, outrageous, uproarious, unapologetic, crude, vulgar, true to life; it breaks new ground in Bollywood and is whole lot beside. This Delhi Belly movie review may be more than a week late, but it is not too late for you to catch the film in the theatres, which I highly recommends.

Before weighing in with this film review of Delhi Belly, there are two things to consider – if one finds films such as Welcome, Thank You, Sorry (sorry, is that not a film yet?), Double Dhamaal and Ready funny, then one will wonder where and when to laugh while watching Delhi Belly – at several points when my friend and I were falling about with laughter there was dead silence from other parts of the theater. Also if you find expletives and shit (there! I said the word!) offensive, if you find it repulsive to hear the scatological processes of others on screen, don’t watch the film; it is not for the lily-livered or the faint of heart.

The Story of Delhi Belly 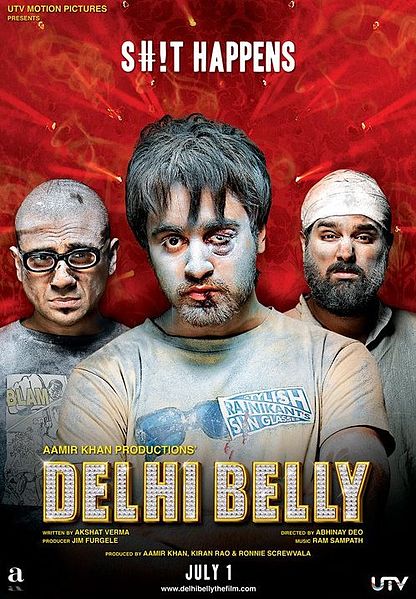 The story of the film consists of three guys who are roommates in a particularly seedy building of Delhi living a life with only a passing resemblance to civilization, and who get embroiled with the Delhi underworld due to a sequence of strange events. The three guys are Tashi (Imran Khan) the journalist who wants to be covering serious stories but is stuck interviewing vapid pop stars, Nitin (Kunal Roy Kapur) photo journalist and part time blackmailer, and Arup (Vir Das) ad executive, the twin banes of whose life are a callous girlfriend and an idiotic boss.

The trouble starts when Nitin, who is beset with a stomach infection (a Delhi Belly, get the connection?) asks Arup to deliver a stool sample to the lab and another mysterious parcel from Tashi’s girlfriend (Shenaz Treasurywala playing an airhostess) to another address. Obviously the two get mixed up and the mysterious parcel which contains smuggled diamonds lands up in the lab.

On the other hand, the stool sample lands up with the smuggler goons who are more than a little surprised to find, well, shit instead of the diamonds they had been expecting. The underworld thug (a deliciously seedy looking Vijay Raaz) is not best pleased and proceeds to rough up the smuggler (a firang called Vladimir, don’t you know) and take the necessary steps to recover his diamonds and all manner of violent mayhem ensues.

The interesting subplots involve Tashi’s colleague Meneka (Poorna Jagannathan) and the man she is in the process of divorcing and Meneka’s chemistry with Tashi. Then there is the sleazy jeweler (Rajendra Sethi) and the good at heart landlord (Paresh Ganatra) who has the unfortunate predilection for fat prostitutes who give the story more points of interest.

The Plus Points of Delhi Belly

The humour in the film is not by force – it may be crude, vulgar and may even put you off your movie popcorn for a considerable length of time; but it is very much flows naturally from the story (pun unintended) and is truly and uproariously funny. The foul mouthed characters are thoroughly believable and realistic. And though this is a genre of comedy hitherto unexplored in India, there is no doubt that this is an Indian film in every sense of the word; there are no discernible cringe-worthy copycat moments.

The cast is superb, the acting subtle or beautifully over the top as required, the pace of the film never lags, it is gripping and there isn’t a dull moment in the film. This is an adult film and you cannot, repeat cannot take children to watch it.

The Minus Point of Delhi Belly

My only regret, as I set out my thoughts in this Delhi Belly movie review, is that I wish that I could have seen the English version of the film –clearly the Hindi version is the dubbed version and the lip synch is a little dodgy.  I end with the wish that this film does really well and gives other filmmakers the courage to venture into the uncharted territory where this film has so boldly gone. As of now I await the DVD release of the film.