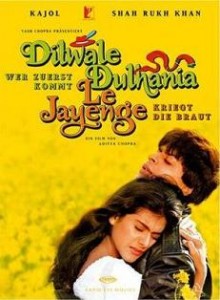 Released 15 years back on October 20, 1995, SRK and Kajol starrer Dilwale Dulhaniya Le Jayenge (DDLJ) has set a new record. It has become the longest running film of the world. For the last 15 years it is being played at the Maratha Mandir in Mumbai and till date has managed to woo the audience.

As we now see the magical couple of K Jo and Shah Rukh successfully make a comeback in their latest release ‘My Name Is Khan,’ the two seem to have mesmerized the viewers a lot more than it appears. DDLJ is a timeless love story, directed by Aditya Chopra. Like old wine, it just keeps getting better with time.

DDLJ is a family entertainer that was praised across the globe and has won innumerable awards. The accolades seem to have no end of this classic B-wood flick!