You have to hand it to the man, he is 68 and he still manages to land the choicest roles available in Hindi cinema. In Bbuddah hoga tera Baap, Amitabh Bachchan can be seen wearing colorful clothes and other funky effects such as a yellow scarf.

The film is an irreverent comedy about a cussed, angry old man. However, Amitabh says he’s just an ‘angry man’ now. 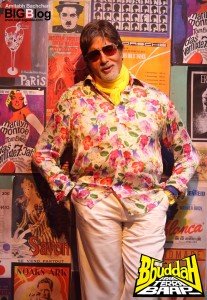 The film has the unique distinction of having roped in as many as five fine female actresses – it marks a cinematic return of Raveena Tandon, veteran Hema Malini, the demure Minissha Lamba and charming Sonal Chauhan. Interestingly, this movie will also be the Bollywood debut of Charmy Kaur who is known mainly for her roles in Telugu cinema.

The Bbuddah’s character that Amitabh Bachchan plays is, in his own words “trendy, unapologetic, and strong.” He plays an ex-gangster who is back in the country for a specific mission. Leather jacketed, astride a motorbike, shooting with impeccable aim, and mouthing some of his own past iconic lines, he is very much the hero of the movie. And he does it all with the agility of a man decades younger.

When asked about his choice for doing this film, he felt that cinema today is driven by the youth. Directors are increasingly basing their choice of films on what the youth wants.

“Indian cinema will change with every generation! When we came in the 1970s and 1980s, people, the old-timers, didn’t necessarily agree with what we did. They said, ‘What is this man like? In every film he has a frown on his face, bashing up people!’ They didn’t like it but the youngsters seemed to like it, and so we went ahead. The modern generation now likes romantic and young films and films that show more stuff that is very prevalent in the youth today.”

In Buddah Hoga Tera Baap, Bachchan is seen doing all the routines which his younger counterparts enjoy doing – bashing up the bad guys, singing songs, romancing here and there and using the choicest verbal expletives.