This year has begun with two films which have hit the box office gold and have given the Bollywood industry some hope for the future of this year’s collections. Both Band Baaja Baraat and  Tanu Weds Manu have surprised us and delighted us with their lively ambience and their free for all contemporary stories and also due to the fact that they are openly targeting Bollywood’s biggest audience – the youth of India.

But what is even more amazing is that both these films are based on weddings – either as wedding planners – in Band Baaja Baraat or as arranged marriages going a bit wonky in Tanu Weds Manu. They have once again brought the chaotic North Indian weddings into the forefront and the story- writers have realised that weddings have all the ingredients of a blockbuster movie. 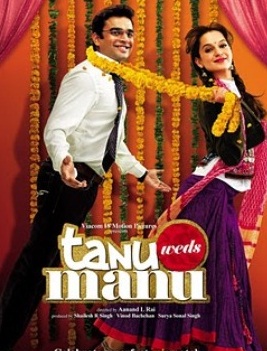 These films are just part of a growing group of Bollywood films – which have wedding based stories. The most popular among them of course was the all-time blockbuster – Hum Aapke Hain Kaun, but we had many others also which the same story bylines – Monsoon Wedding,  Dilwale Dulhaniya Leh Jayenge, Jab We Met, Vivaah and many others.

Glamour and Glitz are all part of the atmosphere:

Where else can you dress all the heroines up in all the most glitzy outfits and shimmering jewellery? The men can wear beautiful sherwanis and kurta pajamas through most of the film, they can dance at the first sound of a dholak and you can decorate the entire place with every colour under the rainbow. All this is par for the course and no one complains about too much ostentation. So much so that Imagine TV has now started a reality show which will provide a wedding of Rs. 3 crore for one “lucky “couple. More flash and more show – and we shall all enjoy it thoroughly. In Band Baaja Baraat, they have shown what is seemingly impossible nowadays – a wedding celebration being organised within Rs. 2 lakhs. If you have organised a wedding yourself in real life then you will comprehend and appreciate the mayhem around the actors.

Emotions ranging from tears to smiles and laughter:

Weddings can incorporate tears at the drop of a hat, smiles from all those around you – including aging grandmothers and ancient servants (how come all these families have servants who have been with them for years and serve them faithfully?).  Weddings are great occasions for emotional melodrama, you need nothing more than a weepy mother, a harassed father and a greedy mother-in-law and you have the makings of a Bollywood film.

There are so many people involved in an Indian wedding that you can have many sub-plots going along the entire film. Remember Monsoon Wedding – there was a child abuse story, a former boy-friend drama and a romance between the tent-wallah and the maid all happening along with the main story. What more does the script-writer need – all he needs to do is weave a story around all the side entities of the film!

Music in all it’s glory:

If you think back you will realise that the most popular happy songs from Hindi films are all associated with marriages and wedding ceremonies. Hum Aapke Hain Kaun had over 14 songs – and all of them went on to become the year’s most popular hits. Zubeidaa’s Mehndi Hai Rachne Wali song has lived longer than the film has! Baharon Phool Barsao has been the standard ‘arrival of the bride’ song for many decades. Babul Ki Duaien Leti Jaa from  Neel Kamal can bring tears to the eyes of most hardened family members. Every musician and lyricist has at some stage of his/her life written a song for a wedding and all of us have our favourite songs which we love to play again and again at our family weddings.

So you see, weddings are very popular among Bollywood producers for many reasons – and also among the audience. We love them and enjoy the feel-good feel of the happy endings. We follow the trends and connect with the laughter and merriment. And above all, we hope and pray that the weddings in our family will also leave us a feeling that is God is in His/Her heaven and all is well with the world.