The year is already halfway down, and the Hindi film industry, a.k.a Bollywood has had a fairly peaceful time so far. No earth shattering or momentous scandals, just a few bumps along the way and a major tiff between the producers of films and the powerful multiplex owners. Here are 7 scoops we thought you should know about the hindi film industry in 2009.

There have been a few incidents here and there, some surprising ones and one deplorable one, but nothing that could really fill the pages of gossip and film magazines. Bollywood also lost a man who was considered to be the last of the ‘Pathans’ in the industry. 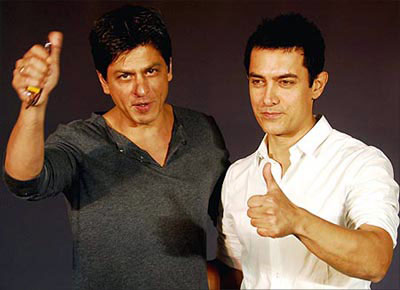 The most remarkable event that occurred in the last few months was the temporary shutting down of all multiplexes all over the country for four months due to a dispute on revenue sharing between the producers of the film industry and the multiplex owners. The general public did not really understand the complexities of the dispute, but it was clear that unless they resolved it, they were all losing money and all of us were missing out on our weekly entertainment quotient.

They finally reached an agreement on June 4th where “a suitable ratio for both parties “ was decided upon. The public heaved a sigh of relief, Bollywood went back to producing and distributing and the multiplexes went back to charging hefty fees for bad food, mediocre films and good air-conditioning.

The most riveting part of this dispute was the presence of both Aamir and Shahrukh on the same table, on behalf of the Producers and advocating the same cause. This was one of the rare occasions when the film community stood together on the same stage, espousing the same manifesto.

For more on this issue, read our previous article [intlink id=”736″ type=”post” target=”_blank”]here.[/intlink] 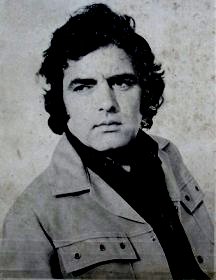 With the demise of Feroz Khan, Bollywood lost one of its most iconic figures. Flamboyance was his hallmark, and he always remained a non-conventional star. He made stylish films, and even as an actor himself, his persona was always one of a man of elegance and panache. His role in the film Qurbani, put him into the big league of actors, and he followed this up with his popular directorial ventures such as Jaanbaaz and Dayavan. Bollywood shall miss him, because there are very few actors who can match his style and panache.

Presently the most popular ongoing soap opera is that of Shiney Ahuja – and his arrest on the charges of raping his 20 year old maid. Despite vehement protests and denials from his wife Anupam, it now seems that after the DNA tests proved it, Shiney has accepted the fact that he had sex with his maid. Now he has termed it as consensual sex and since she is an adult, he is hoping that the charges will be proven wrong.

The general consensus from the public, is that here is a good actor, caught in a situation which is of his own making, and no directors or script writers will be able to write a happy ending to this story. 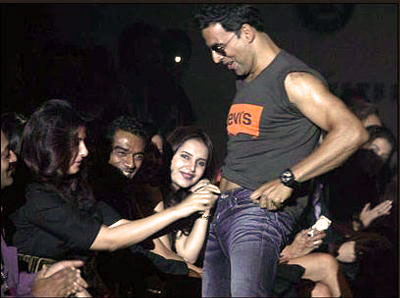 This was probably the most ridiculous of all scandals that erupted in Bollywood circles. Akshay Kumar, our gorgeous hunk, was modelling denims for Taurn Tahiliani at a Fashion show in Mumbai. While sashaying down the ramp he went up to his wife Twinkle and asked her to unzip his trousers. Now we are not too sure as to how far this went – after all we have it on good authority that he was wearing some underclothing beneath the denims, but India’s moral brigade was horrified. So like all good policemen they filed a case of obscenity against both husband and wife, arrested them and released them on bail. We shall watch with great interest the ramifications of this legal battle. 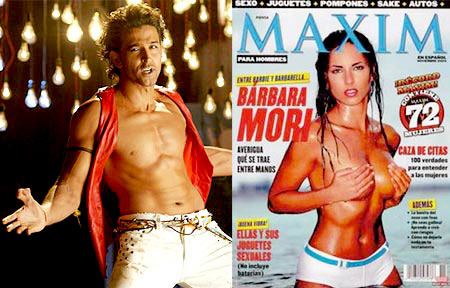 Now this is one scandal, which nobody seems to be sure about. The paparazzi insist there were some sparks between Hrithik and the sensual Barbara Mori during the shooting of Anurag Basu’s film Kites. The rumours were strong enough to cause Suzanne Roshan’s departure from her home for a short while, though ostensibly for renovation reasons. Hrithik is now back home in the cocoon of his family, and the public is eagerly awaiting the release of this film, since so much hype has already been built up about it. Are there really any steamy scenes in the film and is there really any evidence there of an off-screen steamy relationship? Our guess is that it was a publicity stunt to up the market buzz surrounding Kites.

Preity Zinta and Ness Wadia – the relationship is over now. 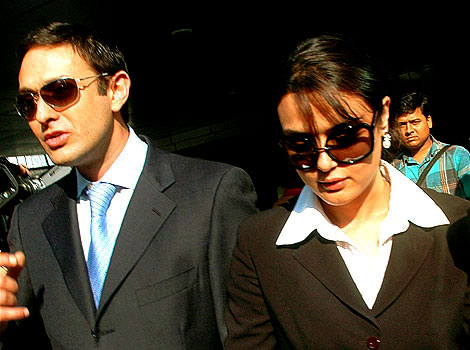 These two were among Bollywood’s golden couples. Good looking and elegant, they maintained their relationship away from the media glare and with dignity and grace. They had a working relationship in their ownership of the IPL team Punjab Kings XI. They had been together since 2005, and despite being in the public eye most of the time, they managed to retain the privacy of their relationship. The official announcement of the break-up  came in the form of an official note to the members of their cricket team, once again proving that poise and grace under pressure is the hallmark of only a few of Bollywood’s denizens.

Neetu Chandra – a bikini photo shoot that turned into a scandal 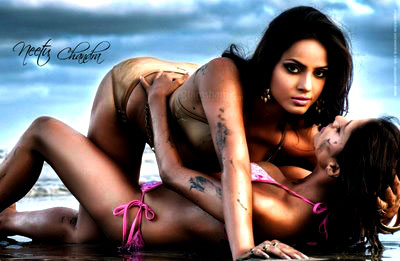 Now, Neetu Chandra is not your average small time heroine of minor Bollywood films. She is a black belt holder in Taekwondo, has represented India in International tournaments, and is a model/actress. She has done small roles in films such as Oye Lucky!Lucky Oye, Satyamev Jayate among others. But her latest claim to fame is her infamous photo shoot at a hotel in Juhu for the magazine The Man. She and another model were dressed in sexy bikinis and were posing in provocative poses with each other, when around 80 protestors gathered and began to pass lewd remarks. The shoot had to be cancelled – but the few photographs that were taken are among the most searched for images on the Net nowadays!!