There have been movies and then there have been extraordinary movies… movies that have changed the way we look at society and at basic human emotions such as love. Here is a line-up of Hindi movies which in our opinion have made a solid lasting impact on Bollywood filmmaking and its various techniques. In fact, some of the names below have already become legends in Bollywood filmmaking and will be remembered for their excellent work.

10 Hindi Films Which Changed the Course of Bollywood Filmmaking 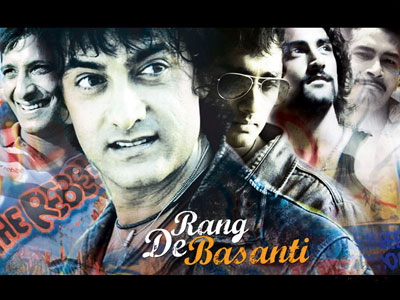 (Released: 2006) Rang De Basanti was one of the few movies which made me cry.

It touched some part of my psyche because each time I watch this film, my eyes well up. The emotions which run through RDB have been so beautifully shot. Add to this the gripping storyline which talks about corruption in our society with a historical twist. Whether it was the cinematography, or the crisp story telling about  heart tugging friendships which eventually culminated in mayhem… RDB touched lives. And it lifted Bollywood filmmaking to a whole new level.

A level so huge, it actually spawned a national movement that no other movie had been able to do!

Not even the filmmakers could have anticipated that the Jessica Lal murder case would gain so much steam. Mass protests and candle light vigils led were by those who had been deeply inspired by the movie.

I think it was an important Bollywood moment of modern India, where it was established loud and clear that movies not only create dreams but can also spur revolutionary sentiments in the common man.

A film capable of effecting such a movement must definitely have some solid filmmaking to it, right?

(Released: 2001) Dil Chahta Hai did what many movies could only hope of accomplishing. It ushered a new genre of movies in terms of style, storytelling and direction. Aamir’s goatee, Saif’s innocent comedy and the unusual, understated portrayal of Sid by Akshay Khanna made this movie stand apart.

Farhan Akhtar’s direction and editing in the movie were flawless. Not a scene was redundant, not a song unneccesary. Rarely have directors been able to achieve this balance in their filmmaking. Farhan established himself as a man to look out for, this unusual story became the ultimate youth brand of that time.

(Released: 1998) The baap of all gangsta movies, Satya is inspiring several movies to this date… that nobody has been able to equal Bhiku Mhatre’s unique style, is another story. Satya saw RGV at his best and hence was created the Indian answer to all Reservoir Dogs, The Godfathers and every other gangster movie that was ever made in Hollywood. Only that it was more realistic in our desi version..what the heck you could almost smell the sweat on Bhiku Mhatre’s body. Satya set the trend of unpulpified, hard hitting and dark movies.

(Released: 1995) If there was ever a sweet love story for all times, DDLJ is it. A dreamy story with its feet firmly on the ground, DDLJ swept the audience off its feat. It ushered in a new era of love stories where the love birds needn’t be rebels, and where the parents were not the enemies. The movie has a timeless charm and the lead pair (Shahrukh-Kajol) probably never looked better together. 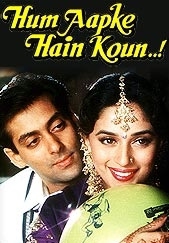 (Released: 1994) Big and happy-beyond-any-reason families came to life after this epic saga. A long movie with a staggering number of songs, HAHK broke all records. Madhuri and Salman were the new icons and a new era was born. Suraj Barjatya may not be the best director, but he does the unconvincing with total conviction. So, when cousins, chacha, mama, taya, tayi and dada-dadi, nana-nani came out to shake a leg to silly songs, in the several other movies that followed HAHK, you knew whom to blame. An enormous turnout of relatives for the silliest of reasons became a common sight in Hindi movies and whether the story required it or not, the hero or the heroine were burdened with truckloads of relatives.

(Released: 1993) Not a great movie per se, this immensely enjoyable film removed the taboo that surrounded the negative characters. It was the genius of Shahrukh to recognize the potential of a role that was reportedly rejected by the method actor, Amir. Shahrukh’s edgy portrayal of the psycho who thinks revenging his mother is more important than a young girl’s life caught the attention of the young audience which was crying for change in movies’ storytelling. What was set off by Baazigar, is now the norm and nobody raises an eyebrow when a “hero” is actually playing the villain or the negative character. 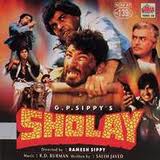 (Released: 1975) Sholay gets included in any top 10 bollywood list. And why should it not? It is a masterpiece like no other. How many other movies do you remember where you know by heart all the lines of all the side characters. Surma Bhopali, the ‘angrezon ke zamaane ka jailor’, mausi, rahman chacha, sambha, kaliya … does anyone know of any other films that created these immortal memories from two bit roles? Well, all that apart, Sholay also spawned an entire era of “daku” films. Most of those films are best left unmentioned but Sholay did create an era like no other. To this day, Sholay continues to make news with remakes and 3D avatars.

(Released: 1973) Not only did it define the course of Bollywood filmmaking through out the 70s , Zanjeer created Amitabh, so to speak. It also created the “angry young man”. The bloodshot eyes and the heavy baritone became a trademark of AB and he became an icon of the angry, agitated youth. Amitabh Bacchan and Zanjeer together created an era of action-emotion movies where the hero was the wronged one and he could attain peace only when he cracked some ribs, or found his mother. Cliché and routine was never more endearing and the oft-repeated story of the separated mother-son gained a new dimension with Amitabh Bacchan playing doting son to a permanently sad and sick looking Nirupa Roy.

(Released: 1931) The first ever “talking, singing, dancing” movie to hit Indian theatres, Alam Ara proved what sound could do to cinema. From the word go, Alam Ara was a big hit and ran to pack theatres. Those were the times when the actors were the singers too and this movie, which was more of a musical had more songs than dialogues. Directed by Ardeshir Irani and made possible with simple cameras and indigenous techniques, Alam Ara went on to become a big success.

(Released: 1913) Many people may not even know what this is. The first ever full length movie in the history of Indian cinema, Raja Harishchandra was produced and directed by Dada Saheb Phalke. 4 reels and 40 minutes long, this movie is an unparalleled landmark. The movie had an all male cast as women could not even dream of doing something so disgraceful as to act in a film.  When one sees the hoopla and money surrounding today’s movies, it’s very very hard to imagine how Dada Saheb’s wife used to cook and take care of the 500 odd crew and cast people. Not only that, she helped with all other aspects of the making, production and publicity of the movie – going even as far washing the cast’s clothes and costumes. One can only begin to imagine the dedication and hard work that must have gone into that labor of love. It’s only befitting that it gets its place in this list. And why do I list it under Hindi films, you may ask? Well, it has Hindi subtitles – and yes I have seen this movie!

It is disheartening to know that no original prints of Raja Harishchandra and Alam Ara remain, all thanks to the fire in the National Films Archive, Pune in 2003.  That these immortals gems could not be preserved better is in itself an indication of the authorities’ apathy towards our movies’ history.

(Released: 1994) Big and happy-beyond-any-reason families came to life after this epic saga. A long movie with a staggering number of songs, HAHK broke all records. Madhuri and Salman were the new icons and a new era was born. Suraj Barjatya may not be the best director, but he does the unconvincing with total conviction. So, when cousins, chacha, mama, taya, tayi and dada-dadi, nana-nani came out to shake a leg to silly songs, in the several other movies that followed HAHK, you knew whom to blame. An enormous turnout of relatives for the silliest of reasons became a common sight in Hindi movies and whether the story required it or not, the hero or the heroine were burdened with truckloads of relatives.