Come 6th August and hindi movie buffs will have another Sonam Kapoor movie to enjoy. ‘Aisha’, is a desi adaptation of Jane Austen’s book Emma. It marks the foray into Bollywood of Anil Kapoor’s younger daughter, Rhea Kapoor, albeit as a producer. Directed by Rajshree Ojha, the film stars the elder Kapoor sibling, Sonam, in the lead role of Aisha. Cast opposite her is the talented actor, Abhay Deol, who plays the role of Arjun.
[ad#post]
The story covers the life of a young upper class Delhi girl Aisha and her friends Pinky, Randhir and Dhruv. In her attempt to play cupid for all the single people around her, Aisha often oversteps the line, thanks to her intrusive behavior. Arjun, who feels she should mind her own business, tries to prevent her from getting into trouble because of this habit. High on style and optimism, Aisha likes to dictate her own terms and goes about match-making, much to the annoyance of Arjun.
[ad#post]
In addition to the talented lead pair, ‘Aisha’ also features appearances by Cyrus Sahukar, Arunoday Singh and Ira Dubey. The background score has been composed by none other than the gifted Amit Trivedi, known for his music in Dev D. Shot in Delhi, Hrishikesh and Mumbai, this romantic comedy seems to be quite promising. 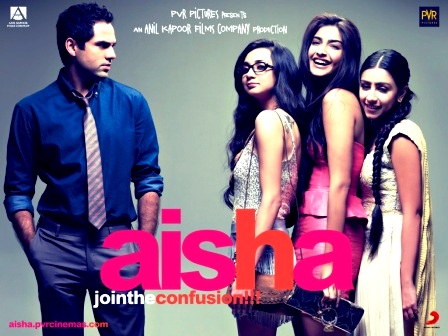